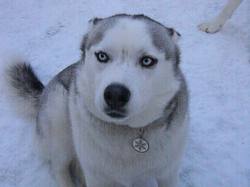 Bandit arrived to Second Chance Mushers from a family who understood the needs of a Siberian Husky and realized that they could not provide him with what he needed.  He is my sweet, quiet, and calm boy of the pack. Sometimes you may not even know he is in he room with you but put a harness on him and you will get a wild man.  Bandit has now entered the life of retirement.  While he still gets to enjoy a free run with the team, Bandit will no longer be pulling on the team.  Enjoy the couch life buddy!

Luna is a sweet, little girl who came to me from a family who could not provide the needs of a Siberian Husky.  She had been placed in a crate for long periods in her young life,resulting she has permanent hair loss to her back two feet.  Her terrible start has not stopped this beautiful girl. Luna has become one of my best lead dogs for the Second Chance Musher team.  Luna is now semi-retired.  She enjoys doing a couple dog sled rides here and there but she mainly loves being the team's "chaser" dog.  This allows the new and upcoming lead dogs to follow her by example. 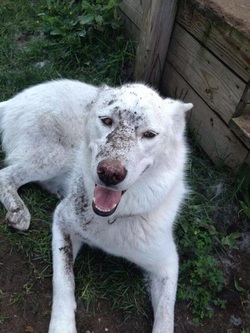 Katori is a spit fire of energy on the Second Chance Musher team.  She arrived at around 8 months of age and had been constantly escaping her owners home.  This is a trait of this breed and the owners decided is was in her best interest to be placed in a new home.  She is a power house on the rear of the team pulling a majority of the weight.  You can hear her screams of excitement from miles away as she is harnessed up.  One thing is for sure, this little girl loves to run! 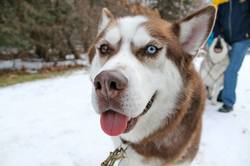 Dartanian is young boy on the Second Chance Mushers team who was adopted from a shelter near Manistee, MI.  It was reported to the shelter that Dartanian was found tied to a mailbox in the middle of nowhere.  He was adopted out a returned for reasons I am not aware of.  The minute I saw this young boy, I feel in love.  He is beyond happy all the time, grinning from ear to ear.  Dartaninan can run in any position on the team which makes him a valuable team member. 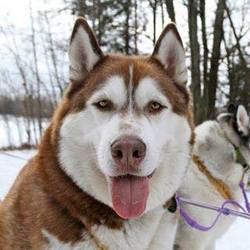 Kodiak came to Second Chance Mushers with his son Buck.  Buck was adopted out but I fell in love with this big "ham bone".   His owner understood that he did not have the time for these two dogs and so they were surrendered to Second Chance Mushers.  Kodiak is a large, square and lovable boy who enjoys any kind of food he can get.  He swoons in all the attention he receives from his adoring public out when giving rides as well. 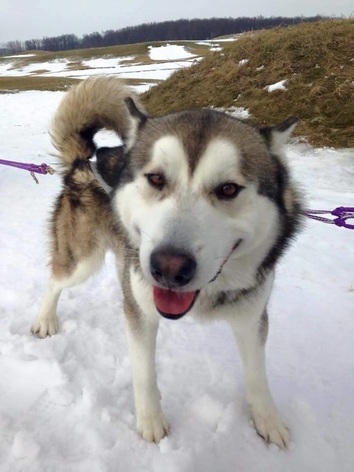 Donte was a Second Chance Musher foster boy who decided to stay.  He is a malamute mix and is full of life.  He brings an energy to the team that can be comparable to that of a steam engine.  Donte has a drive to run to and pull making dog sledding the life for him. Donte came to SCM as an owner surrender because he was portraying that run away trait of this breed.  They realized that he needed a better life to fulfill his need to run and so he came to me.  He now hogs the bed, plays hours on end with his new sister Malakai and seems to just be loving life.  Welcome home big boy! 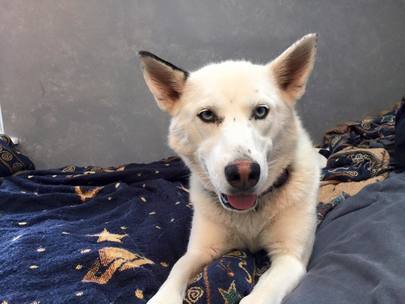 Sweet baby girl Harley came from a neglect situation that involved around 30 other huskies.  When she came to me, she was covered head to toe in scabs, underweight, and feared everyone in the world.  She has since come out of her shell around me but other people who show her kindness, she is just not ready for yet.  Harley absolutely loves the SCM pack.  I feel that they are the reason she trusts me. Everyday is filled with laughter and antics from this little girl.  She is training in lead with Luna and Malakai and I expect great things out this young lady. 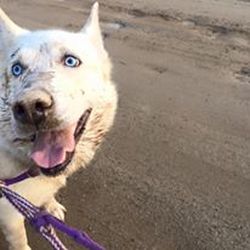 Meet Miss Lucy! Lucy is the sweetest of all my dogs.  It is believed she is lab/shepherd/husky mix.  She loves lounging on the couch, being pet, and eating.  She interacts well with kids and other dogs.  Lucy has been through a lot in her life and has been bounced around. This created some anxiety for the poor girl.  She has improved so much, but she can still at times have a fear of being left behind.  Car rides still create some anxiety and this big girl has been working on that.  Lucy  now enjoys the retirement life as well and spends most of her days sleeping on the couch. 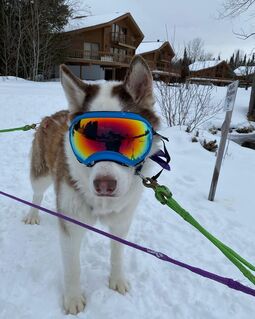 Kodi is a shepsky meaning he is cross between a German Sheperd and a Husky.  This big boy was surrendered to me because he was having some behavioral problems that just couldn't be managed.
​He is a big boy weighing over 80lbs.  Kodi is a youngster of the bunch and he loves to test the older dogs limits all the time.  Kodi enjoys stealing all paper products but mostly toilet paper and shredding them.  Kodi you will find in wheel position on the team.  Kodi is a clown and always likes to keep me on my toes. 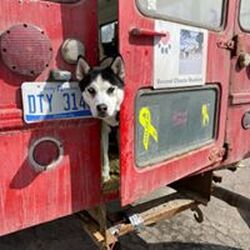 Miss Wyydow also known as Thelma and Louise with Shiloh at the SCM house.  Wyydow came to me from a young gentlemen who got her as a puppy.  He didn't quite realize the commitment to the breed when getting her and with work and college, he understood she needed a better life to live with exercise.  So, Wyydow came to live at the SCM house.  Wyydow's BFF is Shiloh and those two are bonded at the hip and can be found running and playing at all hours of the day in the yard.  Wyydow is learning the ropes of dog sledding and when her puppy mind chills out, I expect to have her run with her BFF Shiloh in lead. 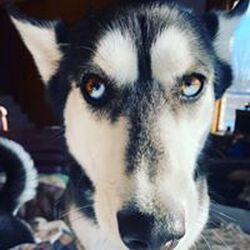 Shiloh came to me from a loving home that loved her dearly.  She is the sweetest of dogs but the family also understood that Shiloh needed exercise and room to run.  Shiloh came to live at the house of SCM.  Shiloh has been here just a short time but is mastering the skills of lead dog quickly.  Shiloh will take Luna's place this upcoming year.  While I don't think Luna is ready to retire fully, she can certainly run "chaser" dog to help Shiloh with training.  Shiloh is the BFF of her sister Wyydow and the two are inseperable. 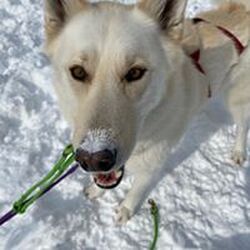 Apollo was surrendered also because the family didn't have the time to give him.  He spent most of his time outside which is why he lyme disease positive meaning he was bitten by an infected tick but has not presented with lyme disease symptoms currently.  Apollo also suffers from discoid lupus that is being managed.
Apollo is a long legged boy who loves nothing more than tormenting his sister, Wyydow and Shiloh but mostly, couch snuggles.  He is a solid appetite and loves life. 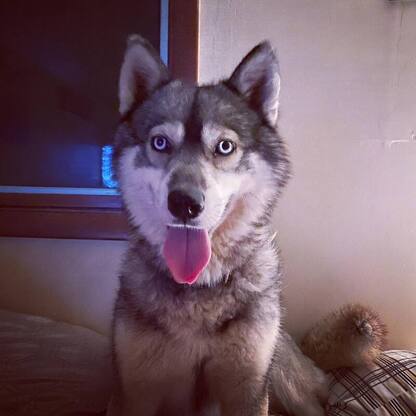 Arlo came to me from shelter where his time was limited.  He was shutdown, broken and afraid of the world when he arrived.  Arlo has now blossomed now into a funny, back talking, king of the SCM household.  He enjoys dog sledding, chasing his sisters, sleeping on the couch, and going to work with his mom.  He is learning how to be a dog again and it is amazing to watch. 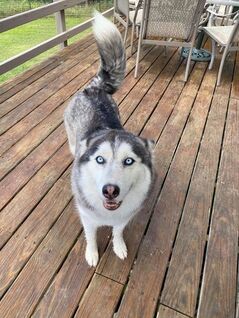 Aspen came from a very loving home but she was not agreeing on things with her sister. It was in Aspen’s best interest to find a new home so she came to SCMR. She’s a loving girl but remains timid of new people. That is something we are going to work very hard on. She a drive to run in harness, loves playing with her siblings and most of all food. Welcome Aspen. 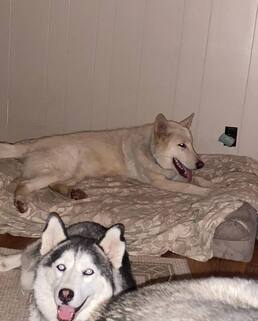 Dakoda came to SCM from another rescue. He is the youngest of the SCM pack and he is also my most shy.  The world is very scary to Dakoda but it is something he is working on overcoming with the help of his new family. He absolutely loves Wyydow, Shiloh, Aspen and Arlo.  Those 4 are inseparable and spend most of their days playing from sunup to sundown.  He loves to hog my bed and steal anything he can from around the house when he thinks I am not looking.  Dakoda is thriving with his pack and they give the joy in life that he desperately was looking for. 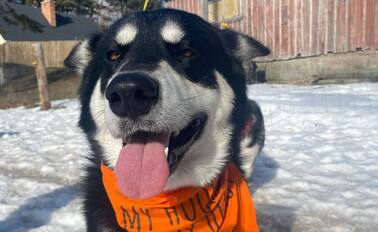 Freyja came to me from a loving family who had to surrender her due to live changes. Freyja is a young Alaskan Malamute and she is nothing short of a clown.  She is the biggest member of my pack, loves to snuggle, and enjoys her cookies.  She had dog aggressive tendencies when she first arrived and she is overcoming that everyday. 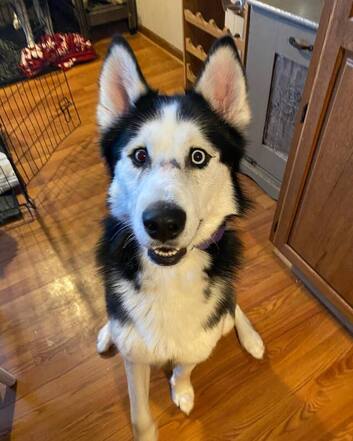 Echo came from another rescue due to his aggression with resource guarding.  Echo has been working very hard to overcome this and I am so proud of the progress he has made.  He is a young boy, full of energy and he just wants to please.  I see great things from Echo. 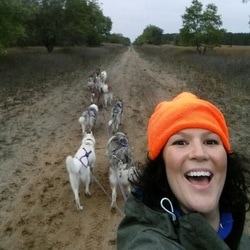 ​My name is Sarah and  I am the musher of this amazing group of dogs.  These dogs are my and life and they mean everything to me.  I have been dog sledding for over 10 years and it has become my passion.  All the dogs on my team are rescued because this breed can be so misunderstood.   More times than not it because their physical needs are not being met. My dogs come first in my life and I will always make sure that they are healthy and happy.  Keep Calm and Dog Sled On!